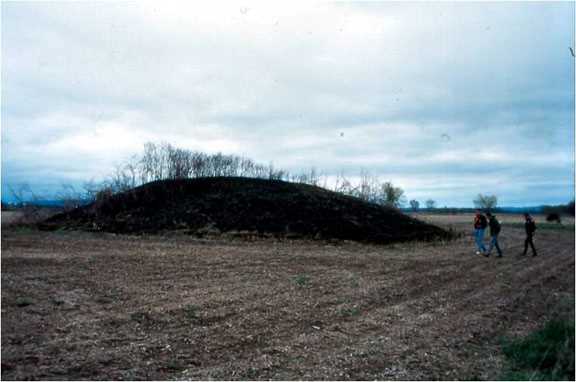 Nicholls Mound Nicholls Mound near the city of Trempealeau on the Mississippi River is an example of a Hopewell site in Wisconsin. When archaeologists from the Milwaukee Public Museum excavated the mound in the late 1920 – 1930’s they discovered a burial tomb dug into the ground and covered with logs. A 12 foot high mound was built over the tomb. The tomb contained several individuals who were buried with ceremonial items made from exotic materials. Some of the items included large stone knives over 6 inches long made of obsidian from the Rocky Mountains, copper earspools, 6 copper axes, marine shell beads, and 20 freshwater pearl beads. You can still visit Nicholls mound from the Great River State Bike Trail just east of Trempealeau. Link to learn more about Nicholls Mound. Pictured: A recent picture of Nicholls Mound.