What do we know about Wisconsin's first farmers? How were the farmfields themselves organized, and how were the crops grown? What crops were most important? These kinds of questions are answered both by the preserved plant remains and by the remnants of the agricultural fields themselves.

Farming became important with the Oneota culture. Fields were dotted with low corn hills with beans growing up the corn stalks. Squashes between the corn plants would have served as mulch, to keep the soil from drying out and blocking weeds from growing. Tobaccos and sunflowers were probably grown on the margins of the fields.

In the La Crosse, Wisconsin area, large scale excavations at the Sand Lake Site revealed extensive areas of ridged fields that provide direct evidence of how farming was done. The fertile topsoil is heaped up into ridges that are in rows across the field. Corn, beans and squash were called the "three sisters" and were very important in the life of the Oneota people. The crops were planted in small hills on top of the ridges. The ridges may have served to control frost damage or improve drainage. 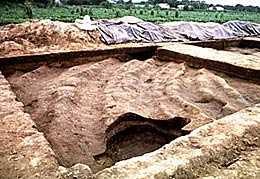 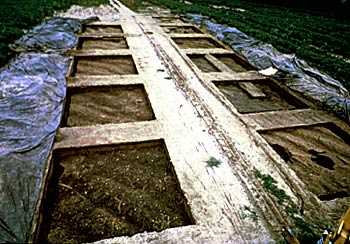 Large scale excavations at the Sand Lake site in Onalaska revealed extensive areas of ridged fields. The fertile topsoil is heaped up into ridges. The ridges may have served to control frost damage or improve drainage.

Corn was first grown in Wisconsin about 1000 AD during the Woodland Tradition. By the Oneota Tradition, about 1300 AD, corn agriculture became very important.

In Wisconsin, beans were first grown during the Oneota period about 1300 AD. There were a wide variety of kidney and pinto beans.

Squash was first domesticated about 5000 BC, and may have started as a small gourd. Through time, people selected for thicker, edible fleshy rind and edible seeds. Squash fragments have been found in Wisconsin from Early Woodland sites, but are most common with the Oneota Tradition. Oneota peoples may have grown both gourds and squashes for eating.

A variety of plants were also grown in addition to the staples of corn, beans and squash. Sunflowers were popular for their edible seeds. Goosefoot (Chenopodium sp.) may have been grown for its tiny starchy seeds or for young tender greens. Little barley (Hordeum pusillum) is a grass that was also cultivated for its starchy seeds.