Making chipped stone tools by hitting one rock with another in a controlled manner is called flintknapping. A hammerstone is used for the early stages of work, an antler for the later stages of shaping the final tool. Points and knives are common kinds of bifaces, which means that the rock has been worked on both sides into a tool.

Lithic analysis might sort artifacts into different kinds of stone tools, such as knives, points, drills. The waste flakes from making stone tools are also sorted. The raw material is described, and where it might have been obtained. This tells us about different kinds of activities, trade and technology. 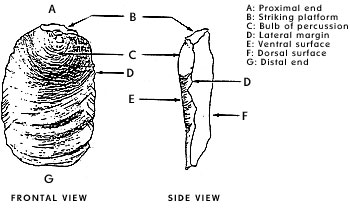 Drawing of a flake Waste Flakes

Flakes are the waste products of making a stone tool. Flakes have very sharp edges and were often used as cutting tools. Each flake will have a bulb of percussion at the place where the flake was hit. This is similar to what happens when a rock hitting glass forms a cone.

A variety of stone tools were used, including knives, scrapers, drills, and tools used in the manufacture of other tools (hammerstones, cores). Tools were either bifaces that were worked on both sides (top and bottom), such as knives or projectile points, or unifaces, such as scrapers or utilized flakes that were worked on only one side of the artifact.

Projectile points are chipped (flintknapped) stones such as spear tips or arrowheads. They have changed shape and size over time. These changes have been well documented by archaeologists, and sites can be dated by the style of point found at a site.

Size, shape and design of points changes, particularly the base and haft area. There may be stems that expand or contract, notches that angle in from the corner or come straight in from the site. The base may be flat across or curved in or out, and may be ground smooth.

Most stone tools are made of chert or flint, quartzite, quartz, or chalcedony. These stones are fine-grained, break in a predictable manner, and yield sharp edges. The best materials were highly valued and were traded widely. We have found flakes of obsidian that came from Yellowstone Park in Wyoming all the way to Wisconsin. Usage of specific raw materials changes through time, and can be used to trace trade networks and population movements.

Making a Spear or Arrow

Although the wood for the spears and arrows has not survived, we have found abraders used for straightening and smoothing the shafts. Based on modern experiments, it seems likely that making the wooden shafts would have taken longer than making the stone tips. The wood would need to be trimmed, straightened, and smoothed, then carefully ground till it had the right balance. Fletching made from turkey or other feathers was added to improve flight.

For the first 10,000 years on this continent, people used spears. Sometimes an atlatl or spearthrower was used to give extra power and distance to the throw. The atlatl is a long stick with a hook at the end to catch the end of the spear and provide extra leverage when throwing it. The bow and arrow were first made in the Late Woodland period after 750 AD. At this time, points become much smaller, and are typically triangular.

Sometimes stone was pecked and ground to make axes to cut wood, or manos and metates to grind food. These tools were often made of igneous rock such as granite or basalt. Grinding stones might also be made of limestone. Igneous rocks might also be used as hammerstones in flintknapping.

Making a Spear or Arrow