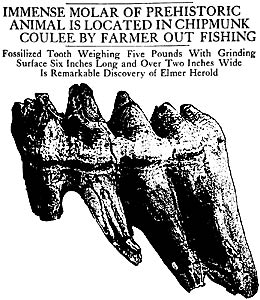 Sometimes artifacts are found by local farmers eroding from the bank, as happened with this mastodon tooth. (From La Crosse Tribune, June 10, 1923)Archaeologists use everything available to them to try to create a picture of what life was like for the people who lived long ago. Like historians and anthropologists who also study people and how they live, sometimes archaeologists talk to living people, or observe them to find out about what life was like in the past. Archaeologists might even ask living people if they know stories or legends about specific locations where people might have lived centuries ago.

Archaeologists can look at old newspapers, books, journals, and official documents to learn more about what happened in the past. But many times there are no written records. The early people in North America did not have a writing system and lived here long before others made written records to document their existence. This time period is sometimes called "prehistoric" which means a time before written records. The term prehistoric does not mean that there was no history; it means that the history was not documented in written form.

Archaeology is not the only way to learn about the past. For the more recent past historians can use written records. Some people use other ways to construct their views about the lives of those who lived a long time ago. Many Native Americans have oral traditions that tell them about what life was like in the past. Many people have religious beliefs that encompass views or ideas about people who lived in the past.

The names used in this web site about Wisconsin's past people are names that archaeologists use to identify these people. They are not tribal names. No early boy or girl called themselves a Paleo person. Early people might have had their own name or identification for themselves and other groups that they knew about or came across. The names or "traditions" that archaeologists use are a means of identifying people who lived within a particular time frame and who used similar tools. Living within the same time frame and using similar tools implies similar ways of living. Those people with a similar way of living are said to have a common lifeway or culture.

Sometimes artifacts are found by local farmers eroding from the bank, as happened with this mastodon tooth. (From La Crosse Tribune, June 10, 1923)What makes the work of archaeologists very difficult is that many of the artifacts that people used and left behind are never found for one reason or another. Some of those artifacts, because of their age or because of the natural materials from which they were made, have just disintegrated and disappeared over the hundreds or thousands of years. Sometimes the artifacts end up in different places from where they were originally left. For example, artifacts left along the bank of a stream may be picked up and moved when the stream floods. Sometimes artifacts just remain buried beneath layers of soil in someone's backyard in a city, under acres of corn in a farmer's field, or beneath leaves and debris on the forest floor.

Being an archaeologist is a challenging job, to be certain. An archaeologist's job is very much like putting together a jigsaw puzzle without having a picture to use as a reference. On top of that, some of the pieces undoubtedly will always remain missing. Even more confusing is that some pieces might seem to fit in more than one place at the same time!

Archaeologists are not just interested in the artifacts recovered from a site. Archaeologists are like detectives working at a crime site. In a murder investigation the location of the gun in relationship to the murder victim can give a detective lots of information. The geographic or spatial relationship between the gun and the murder victim, along with other clues, is called context.

Archaeologists give dates for the beginning and ending of each cultural tradition. However, changes in lifeways rarely happened at the same time all across a broad region. Rather, the change occurred at different times and in different areas in the region. The dates that archaeologists give are general dates. 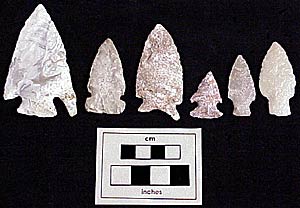 Keep in mind that not everyone does things in the same way. Even though many people live in Wisconsin, most people have differing ideas regarding how things should be done. If we think about the things that people in Wisconsin today do on a Saturday, for instance, we would find lots of different ways to fill the day. If we compared the people in two different cities we might observe similarities, but there would also be differences. An example would be if we were to compare people in Green Bay with those in La Crosse. People in both cities might enjoy boating on a summer Saturday. Some of the boats would be similar in shape and size. La Crosse boaters who enjoy the waters of the Mississippi River often prefer large houseboats with shallow draft hulls with large deck spaces for relaxation. Boaters from Green Bay, on Lake Michigan, use many more sail boats or large power-boats with more seaworthy hulls. Houseboats work better on a large river and sail boats work better on a lake. If archaeologists in the future looked at the boats that were left behind in these two cities they would notice that there are some similarities but there are also definite differences, even though people in both cities live very similar lifeways. 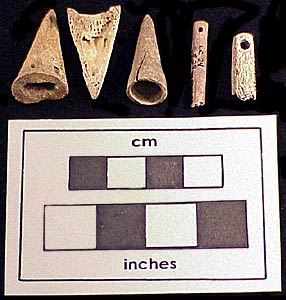 Bones have been made into arrow points, needles, and other tools.Archaeologists mostly find pieces of stones and pottery-materials that do not decay over the centuries. But bones, wood, and other organic material are not as likely to be preserved. Bones can survive if the soil is not too acidic. The bones that archaeologists find in Wisconsin are not fossils like dinosaur bones. They are the real bones, and are often very fragile, or have completely decayed away. But if the bones are preserved, archaeologists can tell the kinds of animals that were hunted, how bones were used for tools, and can even see the cutmarks on the bones to see how the animals were butchered. 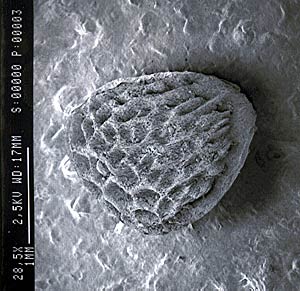 Photograph of a blackberry seed found charred in an archaeological site.Plants are much more fragile than bones. You might wonder how archaeologists could find evidence of squash or corn at a site. It doesn't take long for a pumpkin that's left outside to become a pile of mush. How could pumpkin remains survive for thousands of years for archaeologists to find? Archaeologists don't find whole pumpkins. What they do find are seeds or parts of rind (outside) that have been burnt. When burnt, the seeds are turned into charcoal which preserves better than just the unburnt seed. Archaeologists are very careful when they excavate to recover as much as possible, even the very small things like seeds. 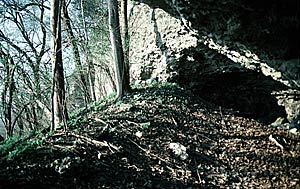 Entrance to a rockshelter Rockshelters are shallow caves or shelters formed in hillsides. People often used such places as winter camping areas, because they provided shelter and protection from the wind and cold. Sites such as Raddatz Rockshelter or Preston Rockshelter in southwestern Wisconsin were popular places to spend the winter. Within the rockshelter small groups of people built fires, cooked, slept, made tools, and probably prepared hides for clothing. Garbage from these activities was left behind. Over the years, sand or rocks from the bedrock above would fall to the ground and bury this garbage. Later inhabitants would live on the new surface, leave their garbage, and it would again be buried. This happened many times, creating a layered record of occupations. These layers were excavated by archaeologists to learn about the different people and how they changed through time. They have found many projectile points, scrapers, and also many deer bone and nutshell fragments that tell us something about the dinners of the ancient people. 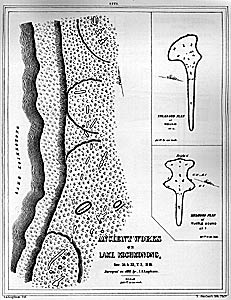 Over eighty percent of the mounds that once were known to exist in Wisconsin have now been destroyed. Some have been plowed down, others destroyed during urban expansion. Today, all mounds and burials in Wisconsin are protected by law. Now archaeologists try to learn about the Woodland people by excavating their camps and villages rather than their burials.

Compared to now, there were fewer trees during Woodland times. Before the arrival of Europeans fires were common each spring. The fires limited tree growth to the stream and river valleys. The broad flat uplands of Wisconsin were prairies when European settlers arrived. The settlers fought these fires and trees spread into larger areas.