To tell the story about the first people who lived in what we now call Wisconsin, we first need to look outside Wisconsin to understand what was happening in other parts of the world. About 12,000 to 20,000 years ago, the earth was nearing the end of a glacial era. A large quantity of the earth's water was locked up in glacial ice, which caused sea levels to be lower than they are today. This lowering of sea level exposed sections of land that were previously underwater. One piece of land that was more exposed during this time was a land "bridge" that extended from what we now call Siberia on the continent of Eurasia to what we know as Alaska on North America. One currently held theory suggests that this exposed land provided a way for both animals and people to walk from Siberia to Alaska.

As people wandered into Alaska through open passageways in the glaciers, they moved southward through what is now Canada and even more southward and eastward across what is now the United States. However, the presence of glaciers kept people from entering parts of Canada and also the far northern part of the United States. As the glaciers continued to retreat, people could then enter other parts of North America. Some people migrated as far south as Central and South America.

Currently archaeologists are investigating other possible ways that people could have arrived in North and South America. A second theory suggests that people came by boats and arrived much earlier than twelve thousand years ago. This is a perfect example of how knowledge of the past is constantly changing as new discoveries are made. 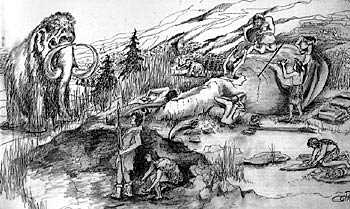