By the end of the Oneota period, there were many changes in Oneota society. Many sites and areas such as La Crosse are abandoned. Archaeologist aren't sure what happened to the Oneota. Some archaeologists think that their populations were decreased through the introduction of European disease. Others think warfare caused the decline of the Oneota. Still others think that the Oneota people moved westward and became involved in the bison hunting with plains tribes. Possibly all these reasons were involved.

We do know that the last village occupied in the La Crosse area was stockaded, suggesting a need for defense against someone. At the time of European contact, villages in the Upper Iowa river in northeastern Iowa had populations from the Ioway and Oto tribes living in villages and making artifacts similar to those made earlier in Oneota cultures. Archaeologists will need to continue to work to find the answer to the question of where the many different groups of Oneota peoples went. Wherever they went, some places, like the La Crosse area, were deserted when the Europeans arrived. 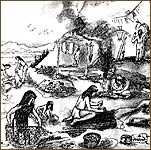 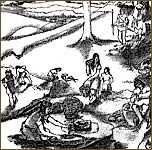 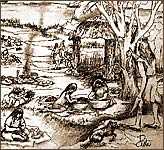