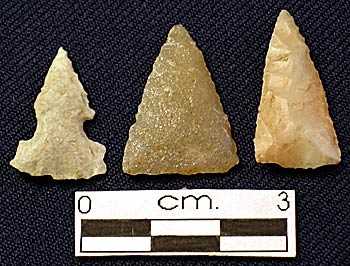 Mississippian and Oneota projectile pointsMississippian people continued to use the bow and arrow and made small triangular arrowheads. They also used the same kinds of other stone tools that earlier people have used-knives, scrapers, modified flakes, hammerstones, and so forth. These were basic tools and worked for each new generation as they had in the past.

A big change for this period is evident in pottery construction. Instead of using sand or ground up rock for temper they used ground clam shells. The shape of their pots also changed from the pointed bottom of the Woodland people to a pot shaped more like a pumpkin. The designs on pots changed and now showed a similarity to the designs that Mississippian people made in southern Illinois. At many sites the only way that archaeologists know that the Mississippians have influenced Wisconsin's Woodland people is by the presence of Mississippian style pottery sherds.