The environment of the people in the Woodland tradition was very similar to today. The hunting and gathering lifeways of the Woodland people were not radically different from the previous lifestyle of the Archaic people. Archaeologists, however, have discovered some differences. Woodland people buried their dead in man-made mounds, made pottery and began to grow plants in small gardens. Archaeologists can see the beginnings of these activities at the end of the Archaic period but Woodland people really developed these activities much further. These changes suggest that people were creating new technologies and making social changes. They also indicate that people were moving around less and were starting to develop stronger territories.

During this time the population increased, which put an increased demand on resources. This resulted in increased tension among people. These things make Woodland people unique from past people. Remember, groups of people didn't just leave and new people with new ways move into Wisconsin. Instead, new ideas and ways of doing things slowly evolved and consequently changed these people's lives. Archaeologists can speculate about these changes by studying the artifacts people left behind. 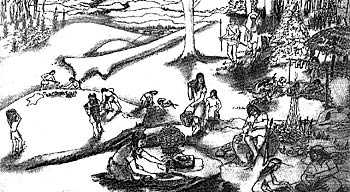