The Oneota and Mississippian traditions are the first full scale farmers in Wisconsin, over 500 years before the arrival of the first Europeans in the state! What caused the southern Woodland people to adapt to this new lifeway? For the answer to that question we need to look outside Wisconsin to southern Illinois. The center of Mississippian tradition was a site called Cahokia across the Mississippi River from the current city of St. Louis, Missouri. Mississippian people in southern Illinois lived in large planned permanent towns with ceremonial centers. Large urban populations were supported by intensive farming of corn, beans and squash. 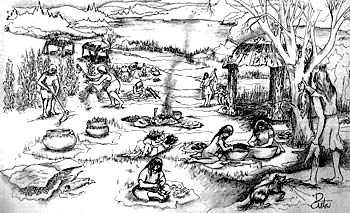