Different point styles mark different times within the Archaic tradition. The Archaic points in the photo extend from the oldest at the left to youngest at the right.Some tools, such as scrapers, knives, modified flakes, and hammerstones, are recovered by archaeologists from Archaic sites. These tools are very similar to those found at Paleo sites. Archaic and Paleo people both used spears but the beautiful fluted Folsom and Clovis projectile points are no longer used by the Archaic people. They still used projectile points but the style of the points changed. Also, Archaic spear points are different in different regions, unlike Paleo points which were similar across North and South America. For example, Archaic points from Wisconsin are different from those in Arizona. Some materials used to make Wisconsin projectile points came from as far away as Illinois. Silver Mound (near Hixton) was also a favorite place for Archaic people to get their material for points. 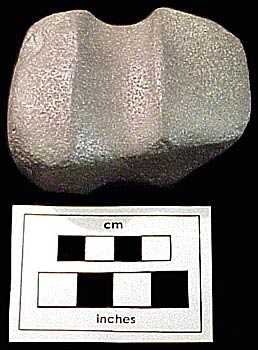 Partially grooved axe.Archaeologists think that a new tool, called an atlatl, or spear-thrower, was first used during this period. The atlatl is used with a spear to make it travel farther and with more force. Archaeologists have not recovered any atlatls from Wisconsin but they have recovered bannerstones that were used as a weight on an atlatl.

Another type of tool new to the Archaic period is the ground stone tool. Unlike projectile points that are made by striking two rocks together, ground stone tools are made by first pecking the surface with another stone to get the general shape, then grinding with a stone like sandstone, to polish the surface and edges. The sandstone acts like an abrasive, something like sandpaper. With lots of pecking and grinding a useful tool, such as an axe or adze, can be made. Archaic people used this technique to make axes, bannerstones and fishing gear.