Copper was found on the surface in this area. Prehistoric "mines" were actually pits that were dug into the earth. Hammerstones or mauls were used to extract nuggets from encasing bedrock. Copper was also collected from stream beds flowing through the copper district.

Copper nuggets were transformed into usable form through the technique of cold hammering. Groundstone mauls or hammerstones were used to pound the nuggets into thin sheets. Extensive hammering causes the copper to become brittle. Heating the copper and cooling it in water during hammering prevents the copper from becoming brittle. 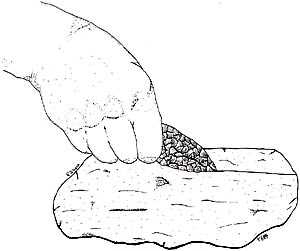 copper2.jpgOnce the copper was out of the surrounding rock it was hammered into the final desired tool or shape. Copper is very soft and can easily be hammered into useful shapes. A sharp stone knife was used to cut pounded sheets of copper into strips. These strips were then used to make rings, tube beads and other ornaments. 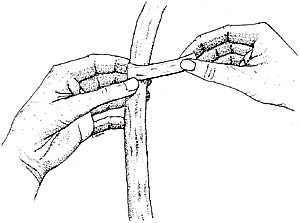 copper3.jpgPure copper is considered a soft metal and is easily worked, similar to pure gold and silver. For ornaments, such as rings and tubular beads, strips of copper were shaped by wrapping them around a toolmaker's finger, wrist or around different sized sticks.