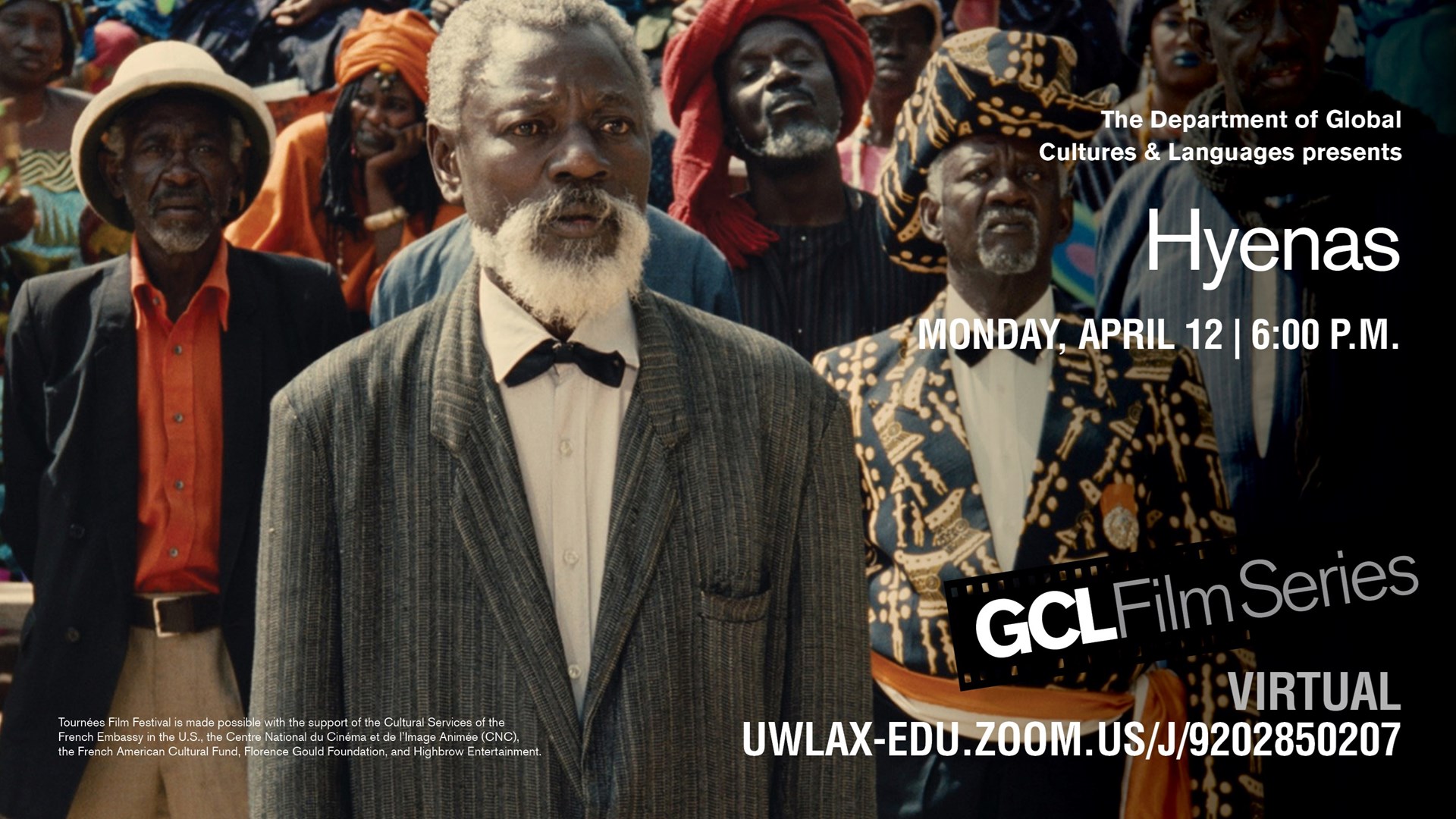 Part 5 of 6 of the GCL Film Series

The Department of Global Cultures & Languages (GCL) cordially invites you to join us virtually as we present Hyenas, the fifth of six films selected from the Tournées Film Festival for our GCL Film Series.

Please join us on Zoom at 6:00pm for opening remarks and to gain access to the virtual streaming platform. After streaming, we will return to Zoom for a discussion of the film.

All films in the GCL Film Series will be subtitled in English.

When the struggling inhabitants of Colobane learn that the colossally wealthy Linguère Ramatou is returning to her impoverished hometown, they put together a welcome committee headed by Linguère’s former lover Dramaan Drameh, in hopes that a warm reception will encourage her to use her wealth to put an end to their problems. Yet Linguère arrives with a shocking proposal to give the town and its citizens an extraordinary amount of money…if they accept to kill Dramaan, who she reveals impregnated and abandoned her when she was a teenager. The vexed citizens initially reject her offer, but as the town’s debt accumulates in the face of a flood of consumer goods, Dramaan begins to fear for his life. With his second and last feature, pioneering Senegalese director Djibril Diop Mambéty loosely adapted Swiss dramatist Friedrich Durrenmatt’s classic play The Visit, setting this universal tale of revenge and moral corruption in an African context that balances references to folklore, timeless parallels between humans and animals, and an astute sense of Senegal and the African continent’s complex place in the global economic order. By breathing new life into Hyenas’s vibrant colors, mesmerizing music, and arresting compositions, this sublime restoration underscores the 1992 masterpiece’s enduring relevance.

Tournées Film Festival is made possible with the support of the Cultural Services of the French Embassy in the U.S., the Centre National du Cinéma et de l’Image Animée (CNC), the French American Cultural Fund, Florence Gould Foundation, and Highbrow Entertainment.

For questions about this event or to request disability accommodations , contact Anna Keefe at 608.785.5246 or akeefe@uwlax.edu.