For each of the last 25 years the Department of Modern Languages has sponsored five international students to work in the department as native-speaker language assistants. On Aug. 28 and 29, the department hosted approximately a dozen past interns, as well as this year’s new arrivals to celebrate this 25th anniversary. The event included an excursion on the La Crosse Queen, tours of the campus and a cook out at the home of Barbara Rusterholz's, Modern Languages. [caption id="attachment_215" align="alignleft" width="394"] 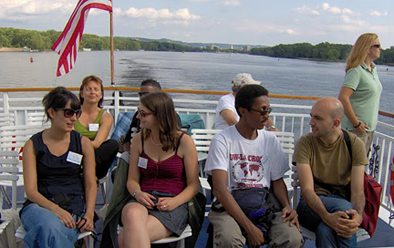 New Amity interns Pilar Pino,Spain, left; and Stevy Claire, France, second from right; chat with 2007-08 interns Salka Blotz, Germany: and Julien Neola, France; during a La Crosse Queen Excursion Aug. 28.[/caption] Many Amity Scholars have remained in the U.S. to finish their graduate education. At least two currently serve as chairs of departments of modern languages at American universities. Most have returned to their home countries where many teach in a variety of educational settings. The Amity Scholars Program has provided an enrichment opportunity for the Department of Modern Languages, students in the programs of this department, the university and the greater La Crosse community, says UW-L Faculty Emeritus John Magerus, former dean of the College of Liberal Studies. [caption id="attachment_216" align="alignright" width="288"] 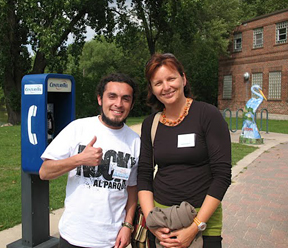 from left: New intern Jorge Franco, Colombia; and 1992-93 intern Jana Eggert, Germany.[/caption] Five Amity Scholars are at UW-L for the 2009-10 academic year representing Colombia, France, Germany and Spain. Find out more about the Amity Program and its history at UW-L at http://www.uwlax.edu/universityrelations/images/2009/fall/sept/Amity.jpg. View more photos at http://picasaweb.google.com/sueellenlee0/AmityReunionFall2009?pli=1&gsessionid=7VtMbsP0vajJRb7UwD_w_A#.