Marsh sounds could explain the mystery behind declining frog population 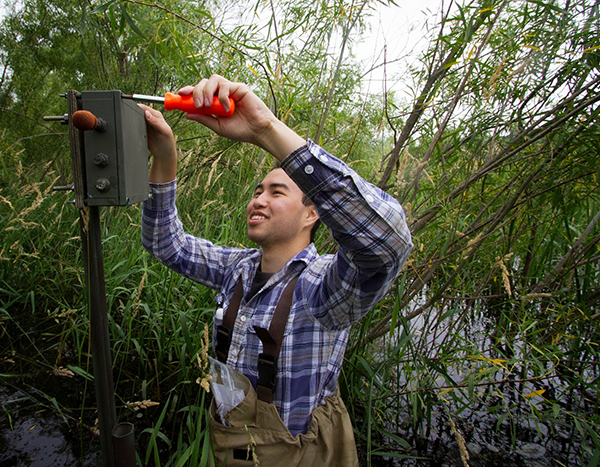 Michael Fuerte, a junior biology major, has been monitoring frogs in the La Crosse River marsh for two years.[/caption] The sound of croaking frogs in La Crosse’s urban marshland may help scientists better understand why amphibian populations are declining worldwide. Near a busy city street, a UW-L student researcher wades through waist high water into the thick of the La Crosse River Marsh. His destination is a small box with two small microphones poking out like ears on either side. Using sound to monitor ecological changes is a growing trend, especially in remote areas, says UW-L Biology Professor Roger Haro. A small computer chip inside the box records sound for five minutes every hour — night and day. Back in the lab, advanced computer software has analyzed thousands of hours singing frogs, displaying their chorus through colorful visual patterns that offer clues about the size and diversity of the frog population. UW-L has been monitoring the sounds for the past three years in partnership with the Upper Midwest Environmental Sciences Center. [caption id="attachment_35228" align="alignright" width="300"] 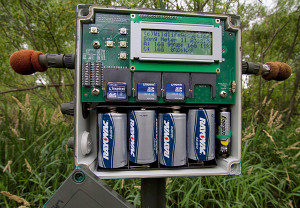 Researchers use this device to record sound for five minutes every hour — night and day.[/caption] “Ultimately, we want to understand how frog species are doing,” says Biology Professor Rob Tyser. “If there are changes, we want to track the reason for the changes.” The efforts are part of a national program launched in response to the worldwide decline in the amphibian population — the Amphibian Research and Monitoring Initiative. Researchers across the U.S. and Canada are monitoring amphibian populations in public lands to determine what factors might be leading to the decline. Little is known about how habitat changes such as highway construction or environmental stressors such as climate change affect amphibians. However, scientists do know amphibians are sensitive to environmental stressors. That’s why they’re a good indicator of overall ecosystem health, according to USGS. The monitoring procedure at the La Crosse River Marsh measures not only the sounds of the ecosystem, but also water chemistry, conductivity, temperature and level. Combining the data, UW-L researchers are interested to discover if contaminants such as pesticides, fertilizer or road salt are impacting the habitat. They want to know if stressors such as a change in water temperature or the Chytrid fungus, previously linked to the decline of amphibians, could potentially be responsible for frog fatality. “This research has made me realize things are more connected than I thought,” says UW-L student researcher Michael Fuerte, a junior biology major. “You tend to not correlate how our actions affect the environment, but they really do.” So far Fuerte and Tyser, his faculty adviser, have found frogs are doing surprisingly well in marshland near St. James Street — despite the hum of cars on a nearby road, a train track and surrounding urban sprawl. But it’s too early to see any long-term changes in the marsh ecosystem, notes Tyser. [caption id="attachment_35231" align="alignright" width="600"] 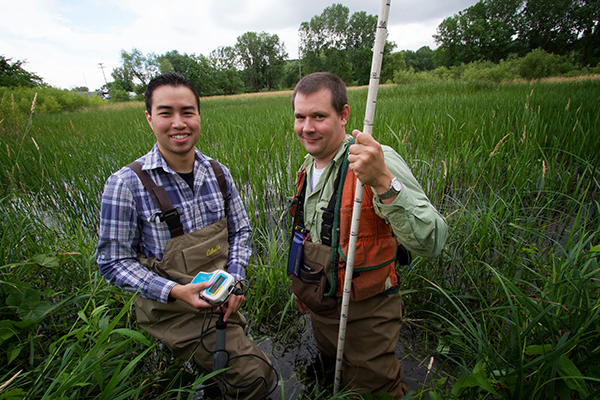 From left, McNair Scholar Michael Fuerte and Mark Roth, biologist with the Upper Midwest Environmental Sciences Center. Monitoring frogs in the La Crosse River marsh is a partnership between UW-L, the Upper Midwest Environmental Sciences Center and the McNair Scholars Program.[/caption] Fuerte has spent two years studying the acoustics of the frog population. He started as a freshman through a program called WiscAMP, which supports minority students in STEM fields. He’s continued to do the research with funding through the McNair Scholars Program, a Federal TRIO program that supports first-generation students with financial need or traditionally underrepresented students on the path to graduate school. One of the goals of the program is to pair undergraduates with those in the working world with graduate degrees, says Haro. Fuerte works with both Tyser and an employee from the Upper Midwest Environmental Sciences Center. Both work in the area he is interested in entering — environmental management or natural resources. Studying frogs has helped him get his feet wet — both literally and figuratively. “This is preparing me for what is to come,” he says. “I know a lot of students tend to rely on lab experience. This is hands-on training.”

A study released in May 2013 involving USGS scientists and other collaborators concluded that the U.S. amphibian populations examined vanished from habitats at an average rate of 3.7 percent each year. If the rate observed is representative and remains unchanged, the species would disappear from half of the habitats they currently occupy in about 20 years, according to USGS. See more photos of UW-L’s frog monitoring in the marsh.