Six UW-La Crosse biochemistry students say a trip to a national research lab and conference this spring validated how much they’ve learned in their field. Yet walking into Argonne National Laboratory where scientists and engineers from across the globe accelerate particles to near the speed of light and use advanced x-ray generating machines to look at objects about 5 million times smaller than a grain of salt, the UWL students were excited about everything they don’t yet know. [caption id="attachment_48736" align="aligncenter" width="685"] 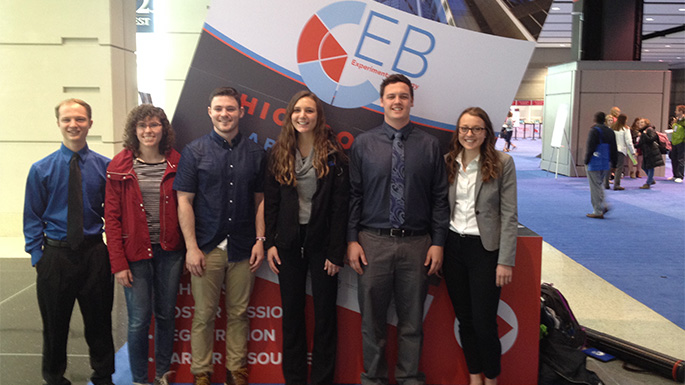 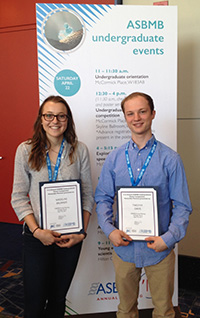 UWL undergraduate student researchers Madeline Brunner and Timothy Davie both won honorable mention awards at the poster competition during the American Society for Biochemistry and Molecular Biology (ASBMB) Annual Meeting 2017 in Chicago. They were two winners out of a group of more than 200 students.[/caption] Students were able to experience world-class science in a hands-on way while understanding how data they are using to analyze their protein structures was collected, says John May, UWL assistant professor of chemistry and biochemistry. “To see science at that scale was very exciting for me as an educator,” he says. In addition to presenting their research, students heard lectures about the latest discoveries in biochemistry and molecular biology. Brunner attended a lecture on what happens biochemically during aging leading to traditional signs such as memory loss. She says hearing high-impact research like this reinforced her decision to continue studying biochemistry in graduate school. “It’s inspiring to know that you could one day make an impact like that,” she says. Davie says the entire experience made him realize that, as an undergraduate researcher, he is already a scientist. “As an undergrad, I never really thought of it that way,” he says. “To be part of that community was really awesome.”