UW-L Professor Barrett Klein has heard the bats he studies are so clever that his research is doomed to fail.

UW-L Professor Barrett Klein has heard the bats he studies are so clever that his research is doomed to fail. “What greater impetus to prevail than to show that we can outwit a bat,” says Klein. So every summer, Klein ventures into the tropical forests and underground tunnels of Panama with his team — the Bat Learning Insect Sleep Squad — to capture fringe-lipped bats and paper wasps in their native habitat. They bring them back to the flight chamber to study their sleep and wake cycles. [caption id="attachment_38505" align="alignnone" width="770"] UW-L Assistant Professor of Biology Barrett Klein "tunneling," a method of capturing bats in underground tunnels abandoned below Pipeline Road in Panama. The tunnel featured arachnids, insects, cold rain runoff … and bats, notes Klein.[/caption] Klein and his team, including Smithsonian collaborators Rachel Page and William Wcislo, aim to understand the possible shared benefits of sleep in the two distantly related animals by restricting their sleep, testing their ability to learn and then releasing them. Klein’s sleep research, which recently received a competitive $26,000 Pell Grant, will lend insight into future studies on the age-old question of why organisms sleep. “It’s really unknown territory — evolutionarily we don’t know the reason why we sleep,” says UW-L Danielle VanBrabant who analyzes videos of sleeping bats for Klein. The research may also lend insight into sleep's impact on human learning. Klein expects the animals’ ability to learn to decrease after they have experienced sleep loss, and the negative effects of sleep loss to be proportionately greater when subjects are faced with more complex tasks. [caption id="attachment_38441" align="alignleft" width="300"] 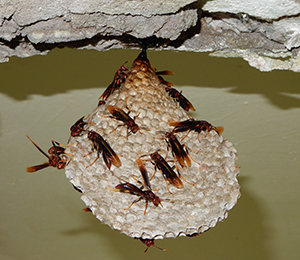 In addition to bats, Assistant Professor Barrett Klein is studying paper wasps.[/caption] UW-L students VanBrabant, Elise Montesinos and Emily Ziegler have watched hundreds of hours of bats on infrared video in Klein’s lab as the animals sleep and groom themselves. Then, they analyze and record their behavior. VanBrabant says the research suits her well as an animal lover who is curious about sleep. It's her first time doing behavioral research, which she calls a team-building experience as she must communicate well and come to an agreement on what she is seeing. Klein says students collecting data is valuable not only for the experience they are getting. “By having students collect data blindly, I won't bias results with what I know about the individual bats and wasps,” says Klein. In the future, he hopes to bring students to Panama with him to work directly with bats and wasps. “This has really shown me that biology is such a diverse field," says VanBrabant. "Studying one species of bat can expand the field and deepen our understanding of the natural world and ourselves.” Klein says his research also investigates sleep in an evolutionary light. Instead of saying little about sleep patterns across a broad swath of organisms or a lot about only one well-studied organism, his research aims to make connections across two very distantly-related animals after testing them in similar experimental protocols. [caption id="attachment_38444" align="alignleft" width="600"]