Yer Lor looks forward to the adventure of one day being a marine biologist. But the educational path to get there has also been an adventure, she notes. 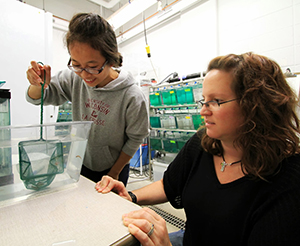 UW-L Senior Yer Lor removes fish from a tank for study with Tisha King-Heiden, assistant professor of biology.[/caption] UW-La Crosse student Yer Lor wants to one day be a marine biologist and explore the mysteries of the deep sea. While she looks forward to that adventure, her undergraduate education has already been adventurous, she says. Through fellowships, grants and programs, Lor has pursued her research interests in places from UW-L’s basement biology laboratory to the largest independent oceanographic research institution in the country. Amid the water tanks and ocean waves, she has learned her love of marine biology. “When I came to UW-L, I knew I was interested in science and I knew I wanted to do research, but I wasn’t sure what kind,” she explains. Lor first landed a summer internship as a UW-L freshman through the National Science Foundation–Research Experience for Undergraduates, which kicked off a chain of connections with researchers in UW-L’s Biology Department and beyond. “One way our students benefit is that most of our faculty came from somewhere else and have connections outside the university,” says Tisha King-Heiden, assistant professor of biology. “I helped Yer find applications so she could find research experiences in a new environment. That’s something we strive to help students do because it gives them the ability to take different approaches to asking questions and gives them a broader research perspective.” UW-L’s commitment to excellence in undergraduate research was recently recognized among an elite group of 39 universities nationally that provide excellence in undergraduate research in U.S. News & World Report’s 2014 America’s Best Colleges list. Federal programs at UW-L also supported Lor’s goals of engaging in campus research and going to graduate school. The Upward Bound program helped her transition from high school to college through university tours, guidance filling out applications and more. Once she was accepted to UW-L, the McNair Scholars program helped her prepare for graduate school with research exposure and other resume building experiences. Today her graduate school resume is looking good. Her name will appear first on a multi-student research paper to be published this fall. The paper is about the reproductive toxicity of Vinclozolin. A tongue twister for sure — the research will lend some clarity into how toxic chemicals like Vinclozolin could be contributing to the declining fish population in Great Lakes Region waters. [caption id="attachment_26647" align="alignright" width="350"] 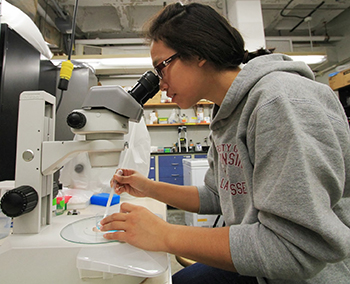 UW-L Senior Yer Lor is a cellular and molecular biology major and chemistry minor.[/caption] The results are a culmination of many research projects in King-Heiden’s lab. Lor’s research provided specific insight into how Vinclozolin limits a female fish’s ability to lay eggs — a contradiction to her hypothesis that the issue was related to reproduction in male fish. “It’s exciting for me when a student learns about the project and can develop their own hypothesis,” says King-Heiden. “And it’s fun to have new experiments going on that answer one more question.” King-Heiden describes Lor as one of her most motivated students — “She gladly takes on a project and gives it her own spin,” she says. Lor says the McNair program provided answers at the right time — when she was wondering where life would take her after college. Through the program she met King-Heiden who is now her faculty adviser for the Vincolzolin project, as well as another research project involving toxicity in the La Crosse River marsh. King-Heiden also helped her connect with a summer 2013 research opportunity at Woods Hole Oceanographic Institution in Massachusetts, which ultimately proved to Lor she was on the right track with her marine biology goals. Today she is investigating graduate programs in marine biology with plans to continue school and earn a doctoral degree. She eventually hopes to work in a research facility where she can learn more about what lives deep down in the ocean. “It’s all been an adventure when I talk about it and think about it,” says Lor. “My education has given me a lot of experience that I think not a lot of students take advantage of. And I’m excited to continue doing research. I’m a curious person. I always want to know more about how and why.”