The buzz: professor explores where insects, dreams and art intersect

Barrett Klein is a UW-L assistant professor of Biology, animal behaviorist and entomologist. Klein is particularly interested in social insects such as bees, wasps and ants, which exhibit qualities such as parental care and a division of labor. 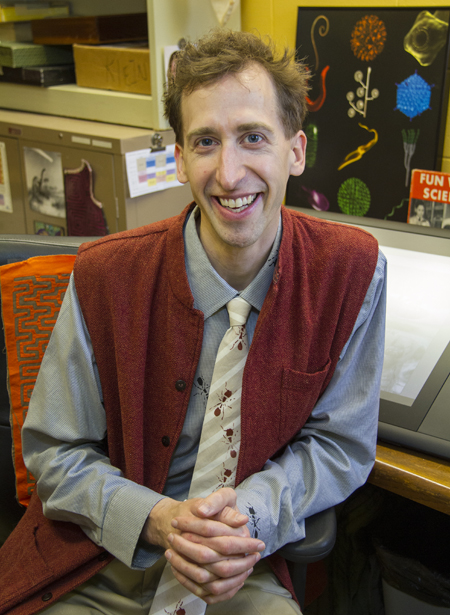 Insects drive some people buggy. But that’s not the case for Assistant Biology Professor Barrett Klein. He has an obvious love of entomology. If not clear from his office adorned with insect art, it’s evident from the ant-patterned neckties he wears to class. His research focuses on social insects such as bees, wasps and ants and why members of such colonies sleep. Klein used florescent dye to successfully image the sleeping brain of a honey bee in a colleague's lab at the University of Konstanz, Germany, prior to starting at UW-L in September. He was able to track activity patterns within the olfactory lobes of the brain during sleep and plans to extend that research at UW-L to better understand how sleep might uniquely benefit learning in honey bees. “Watching a bee's brain while she is asleep is exhilarating ... when it works,” says Klein. “After laboriously preparing many subjects, when a lively bee finally falls asleep and her brain has delivered the fluorescent dye to regions of interest and she responds to odors we present to her, this is a time to celebrate — by enthusiastically collecting more data.” Klein's fascination with dream research began with human dreaming. It took a fortuitous turn when he was introduced to the honey bee sleep research of Walter Kaiser, who is now retired. Connecting the biology with the cultural effects of insects and dreams makes for an especially compelling complement, he says. View his article “The Curious Connection Between Insects and Dreams.” Klein says researchers can only speculate that bees dream in a way that might harbor interesting parallels with humans. The hope is that this sleep research will lend insight into future studies on understanding the age-old question of why humans and other organisms sleep. Such basic research may also contribute to greater understanding of human sleep disorders, learning disorders and better functioning of the brain. His research could also help answer questions about bee behavior and health, which is important at a time when scientists are seeking to understand why bee colonies are declining. [caption id="attachment_16522" align="alignleft" width="450" caption="Thermal images of honey bees taken by Barrett Klein."] 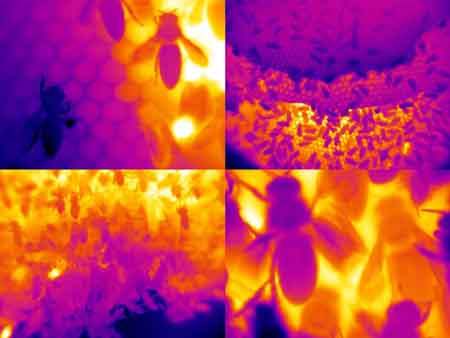 [/caption] But Klein’s interest in entomology goes deeper than science. He challenges whether there is anything in culture that does not relate back to insects in some way. He pulls out decorative examples from his files: a dress worn by Martha Washington adorned with painted insects, a Tiffany Lamp with a dragonfly design and a grasshopper theme on a particular brand of wallpaper. Insects are even in the juice people drink. Don’t believe him? Check out the last ingredient on the bottle of Ruby Red Grapefruit Juice — carmine or cochineal extract, which contributes to its red color. All of these collections are examples of another one of Klein’s loves — cultural entomology — the study of insects’ impact on human culture. He shares a video and photos of the thermal images of honeybees building a comb, heating the brood and communicating by performing [caption id="attachment_16524" align="alignleft" width="450" caption="Barrett Klein’s robotic frogs. The faux frogs, with pneumatically-controlled vocal sacs made of catheters."] 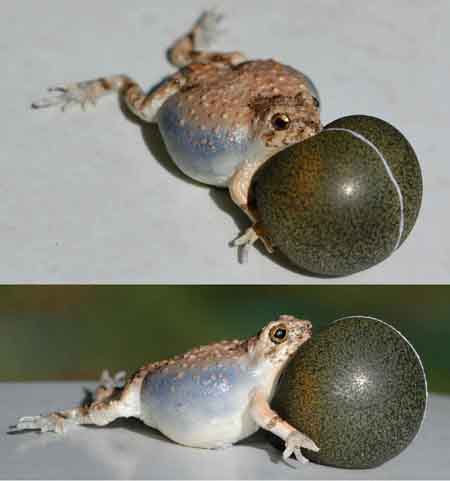 [/caption] “waggle” dances. The video was one of five finalists in The Scientist magazine's 2012 Labby Video contest. The video is also a finalist for the International Science & Engineering Visualization Challenge. Vote for it online. While the images contribute to the study of bee behavior, they are also beautiful pictures in vibrant shades of magenta, orange and yellow. The thermal images have been displayed at art exhibits from Maine to Moscow and online. His artistic ability has also helped with scientific pursuits. From a nearby desk drawer he pulls out a pair of robotic frogs he painted to look identical to real frogs. He plans to use them this summer when he travels to Panama to continue to study the visual and acoustic criteria that frogs use to choose their mates. At times, behavioral research can ask the impossible of a subject, so faux frogs allow Klein and his colleagues, Ryan Taylor and Joey Stein, to present real female frogs with a variety of visual and acoustic stimuli to see what factors are most attractive when the real female frogs select a mate. Klein et al. just published a paper that addresses the value of robots when studying animal behavior. [caption id="attachment_16527" align="alignleft" width="450" caption="Real frog in nature."] 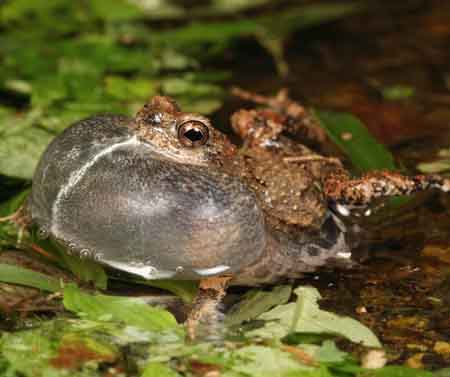 [/caption] He opens scientific journals to pages with his detailed illustrations of insects from tunneling ants to damsel flies. E.O. Wilson, a biologist considered the world’s leading authority on ants, recently asked Klein for an illustration of a new species of subterranean ant to be published this spring in his next book, “Letters to a Young Scientist.” “It doesn’t take that much to exploit the esthetic component of science because nature is inherently appealing and exquisite,” he says. “I see a lot of science that is lack luster, unappealing and dry. Appropriate, esthetically-appealing visuals can improve the clarity of the message as well as improve the understanding and appreciation of science.” Klein teaches courses in general biology, animal biology and a senior capstone course. Stay tuned for courses in animal behavior, entomology and scientific visualization. Learn more about UW-L Biology.