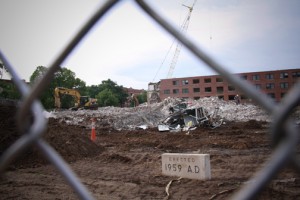 Demolition of Baird, Trowbridge (erected 1959) and Wilder halls is nearing completion. Wilder Hall, below, built in 1951 as the first residence hall on campus, was converted to administrative use in 1971, and housed the offices of Career Services, Counseling and Testing, Computer Based Testing, Academic Discovery Lab, Residence Life, Student Support Services and the military science department. Fifty-eight years later, on July 9, it came down to make room for UW-L's new academic building, " Centennial Hall." Occupancy in "Centennial Hall" is slated for the beginning of the 2011 fall semester. Watch construction progress online at www.uwlax.edu/edtech/centennial-hall. For a map of the construction, visit www.uwlax.edu/universityrelations/images/2009/summer/june/CentennialHallConstructionMap.pdf