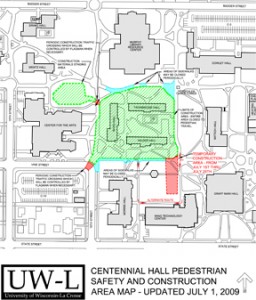 Demolition of Baird, Trowbridge and Wilder halls is underway and the contractor needs to begin running new utilities to the site. In order to tie the new steam lines that will feed Centennial Hall into the existing campus steam distribution system while that system is down in early August, the contractor must disturb an area outside of the main project site. Consequently, an area to the east of the University Memorial Gazebo (north of Wing Technology Center) and the main east-west sidewalk located immediately south of the construction site will be blocked off until the end of July. Pedestrians wanting to move east or west on the south side of the construction site are asked to follow an alternate route. To download a full-sized version of the map, visit www.uwlax.edu/universityrelations/images/2009/summer/june/CentennialHallConstructionMap.pdf.