UW-La Crosse’s “Creative Imperatives” will provide an in-depth look at art and communication on the campus, along with how technology and innovation are advancing the way the world is explored. “Revolutions: Expression, Innovation & Change” is the name of the fifth annual Creative Imperatives sponsored by the UWL School of Arts and Communications. Events include presentations, open studios, discussions, music performances and more. They run throughout two days — Monday, Feb. 26, and Tuesday, Feb. 27— and are free and open to all in the Center for the Arts, Centennial Hall and Wing Technology Center. “Given the importance of technology in our lives we felt it was the right direction for this year,” says Laurie Kincman, festival coordinator and associate professor in Theatre Arts, about the theme. “We’re looking at how technology has changed the creation of our work via new techniques and display methods, how technology has changed our research and inspiration, and how in some areas traditional methods remain the best.” Kincman says it’s fascinating how some things that seem old to us now — like glass negatives featured in a session from Murphy Library — were cutting edge technology in their day. “So we can both admire that process and see how digitizing those negatives allows them to be more accessible to a wider range of artists, scholars and ordinary people,” she says. Kincman says the word “Revolutions” in this year’s title was meant to reflect that — the ongoing cycle of new techniques and creations in combination with older ones (and continuing to learn from those traditions as well). The subtitle of “Expression, Innovation and Change” hopefully further reflects that, she says. “We specifically chose revolution over evolution because the process doesn’t simply move forward,” she explains. “New becomes old, old becomes relevant again, and on and on. One of the discussion-based sessions will feature a panel talking about their art and scholarship, and how they use both the new and the traditional to do what they do.”   Get complete details at: www.uwlax.edu/event/creative-imperatives/   Some of what’s new this year: 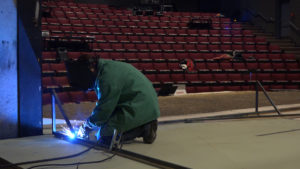 Megan Morey welds a support onto a piece of the set for Big Fish. Morey will join others from the UWL Theatre design team to talk about technology in theatre arts at the 2018 Creative Imperatives.[/caption] Self-described tech geek Ben Golden has been looking forward to helping stage UWL’s production of Big Fish since last summer. The lighting and sound supervisor at UWL knows it’s a tough stage to create since the audience goes on quite the adventure. “They’re in a swamp, in small town in Arkansas, then in New York City,” he says. “We need to take the audience there, but it’s not a movie so we can’t physically go there.” That’s where all of the unique design elements come into play. Golden and Megan Morey, the technical director and scenic designer, are mixing classic theatre arts with new technology. For example, they’ve created a false proscenium – a frame used to make the visible stage smaller – to allow for projections to be displayed. “It’s not how you think of projections, square and on a screen,” says Golden. “We’re mapping it to all the contours of the piece of scenery.” They’ve also set up four turntables for quick scene changes and built a river in the front of the stage that can light up. “We’re telling a story and we can enhance that story with technology,” says Morey. “But as the theatre changes and adds new technology, it can’t be all about flash.” Those elements will help set the mood and atmosphere for the audience. “All of this gives us a sense of where we are and with the right timing, a sound cue can make an audience jump or the perfect light fade can bring them to tears,” says Golden.     Virtual Reality Drawing Lisa Lenarz 4-5 p.m. Monday, Feb. 26, 203 Center for the Arts [caption id="attachment_51137" align="alignright" width="300"] 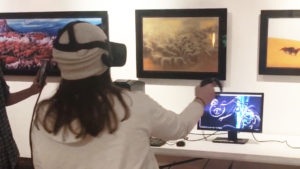 UWL Art Education Student, Ellie DeMuth holds a Virtual Reality Drawing Session at the Pump House Regional Arts Center.[/caption] Q&A with presenter Lisa Lenarz   Q What’s unique about your presentation? A Visitors will have the option to try drawing in the virtual reality environment, as well as observe others interacting in the space — both actual and virtual.   Q What can participants expect to see, do and learn? A Participants will see the future in drawing as it relates to interactive rendering while getting the opportunity to play in that creative space.   Q What will participants find out by doing the exercise? A In the virtual reality space, drawings can be done three-dimensionally, meaning lines can be drawn vertically, horizontally and any number of ways to create depth. Usually drawings operate two-dimensionally and imply depth. One does not often get to draw completely around themselves and walk through it.   Q How do you use virtual reality drawing in your everyday classes? A Having virtual reality drawing in the classroom isn’t an everyday occurrence...yet. Quite possibly in a few years it will be — especially in areas of art and design, engineering, and architecture.       Electricity, Skin, Air and Paint Joe Anderson 11-11:55 a.m. Tuesday, Feb. 27, 203 Center for the Arts   [caption id="attachment_51133" align="alignright" width="240"] 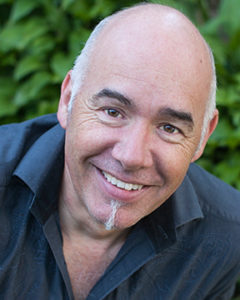 Joe Anderson, UWL Theatre Arts Department.[/caption] Q & A with presenter, Joe Anderson   Q What’s unique about your presentation? A It will be more of a demonstration on how the use of airbrush vs. painted makeup changes things for the theatre artist.   Q What will participants see, do and learn? A They will see me do a demonstration of painted makeup vs. makeup enhanced with airbrushed makeup. The techniques are different but actually work quite well in tandem.   Q What kind of a make-up job are you doing? A I'll likely be doing some sort of fantasy makeup - not associated with any particular show. Opportunities to do this type of makeup very often in theatre are limited.       Discussion: Humor, Technology and Depression Ryan McKelley, Dena Huisman, Beth Mullen Houser, Dawn Norris and Festival Guest John Moe Noon-12:55 p.m. Tuesday, Feb. 27, Hall of Nations, Centennial Hall   Q & A with panel member, Ryan McKelley [caption id="attachment_21120" align="alignright" width="245"] 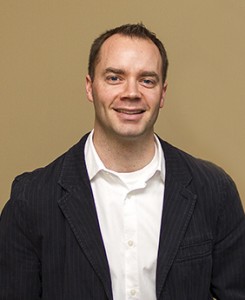 Ryan McKelley, UWL Psychology Department.[/caption]   Q The title of the topic seems like it could be a downer, but it includes “humor.” How can humor help sad situations? A There is no one right way or one size fits all approach to managing depression. And the way we think about mental health as a society doesn’t often find “humor” and “depression” colliding in the same sentence. However, for some people, the ability to laugh about something can be a healthy distraction or way to let off some emotional energy.   This is certainly true for everyday sadness that doesn’t go to the level we see in a depressive episode. When I talk about grief and sadness in some of my psychology courses, I encourage students to think about how children act during funerals or the gatherings that take place after the ceremony. At times they are clearly in tune with the sadness of the adults around them and show similar emotions, but minutes later they can be running around laughing and playing. That is a healthy and natural way to deal with grief and sadness.   In terms of depression, we often think of it as this persistent mood state that follows someone around every minute of the day, but many people still experience an emotional ebb and flow even while in a mild to moderate depressive episode. People should use whatever they can to help manage difficult emotional experiences, and laughter has a place for some in that process.   Q Festival Guest John Moe has a podcast, “The Hilarious World of Depression.” What is he attempting to do in his podcast? A It is important to stress that John Moe’s podcast in no way suggests depression is funny. His goal for the program was to use humor to break down the stigma of talking about depression, so he brings in comedians and witty celebrities to talk about their experiences. The guests on the show are often very high functioning and successful celebrities who have decided to come out of the shadows to let listeners know that they are not alone in their depression.   And yes—many of them are very funny in the way that they reflect on how depression has shown up in their lives. I was surprised by some of the guests that have lived with depression, and it is touching that some of them kind of came out publicly on the podcast for the first time. It clearly meets an unmet need.   Q Is discussing mental health still taboo? A There are several ways people work to reduce the stigma of talking about and seeking help for mental health issues: education, programs to increase mental health literacy, contact, peer support services, etc. This isn’t an exhaustive list. Some recent research has shown that traditional education to reduce stigma has mixed results.   One of the most successful ways to reduce stigma is increasing contact with those who experience mental health issues. I think that is part of the value in John Moe’s podcast. While it doesn’t get to the actual face-to-face contact, guests on the show open up their inner lives in ways that others can connect to their own experiences.   There have been a few meta-analyses (studies that look at the effects of a large number of studies) showing that contact-based anti-stigma interventions are more effective than educational ones in changing peoples’ attitudes and behavior. There is also a bit of a generational effect in that younger generations seem much more likely to talk about mental health than previous generations. Social media has helped support that because many people are more comfortable connecting online with some anonymity than they would be face-to-face.   All the academic speak aside, I do see a slow change in the willingness to talk about mental health. How else can you explain the success of American rapper Logic’s song “1-800-273-8255,” which happens to be the phone number for the National Suicide Prevention Lifeline? I don’t know of any other song about suicide that went double platinum.   Q What will people walk away with? A I hope they walk away with the sense that they are not alone in their depression and anxiety, that we don’t always have to take ourselves seriously all of the time, and that there are many different ways people deal with mental health challenges. While it is up for debate whether Plato was the first to say it or not, there is a great quote that goes, “Be kind, for everyone you meet is fighting a hard battle.” This should be the main take-away from this session!