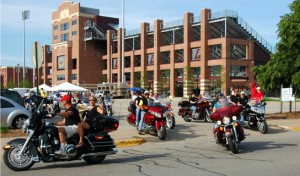 A motorcycle rally at Veterans Hall of Honor at the Veterans Memorial Sports Complex at UW-L followed by a Michael Martin Murphy performance brought many Freedom Fest participants to campus June 20. Other Freedom Fest events were concerts by The Remainders and Lonestar, a Freedom Honor Flight and the 11th Annual Deke Slayton Airfest. The airfest included U.S. military and internationally-known civilian performers with air- and ground-based activities featuring static display aircraft, NASA information and exhibits. 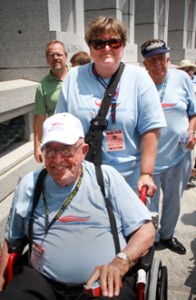 This is the second year that a Freedom Honor Flight left the La Crosse airport taking 100 military veterans to memorials in Washington, D.C., including the National World War II Memorial which opened to the public in April 2004. Senior veterans — World War II survivors — were given top priority for the free trip. The Freedom Honor Flight organization is organizing another flight for October. The Freedom Honor Flight is part of the Honor Flight Network, a national non-profit organization created solely to honor America's veterans. Find out more, including how you can help as a donor or volunteer, at www.freedomhonorflight.org/. For photos of the trip, visit http://picasaweb.google.com/sueellenlee0/FreedomHonorFlightJune202009# and http://s702.photobucket.com/albums/ww27/johnbeere/Honor%20Flight%2006-20-2009/?albumview=slideshow&track=share_email_album_view_click. For photos of the World War II Memorial, including several of the June 20 group, by Stephen R. Brown, author of the book "WWII Memorial: Jewel on the Mall," visit http://wwiimemorial.typepad.com/my_weblog/. 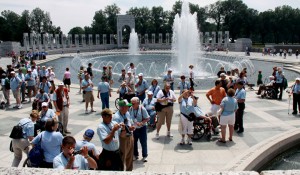